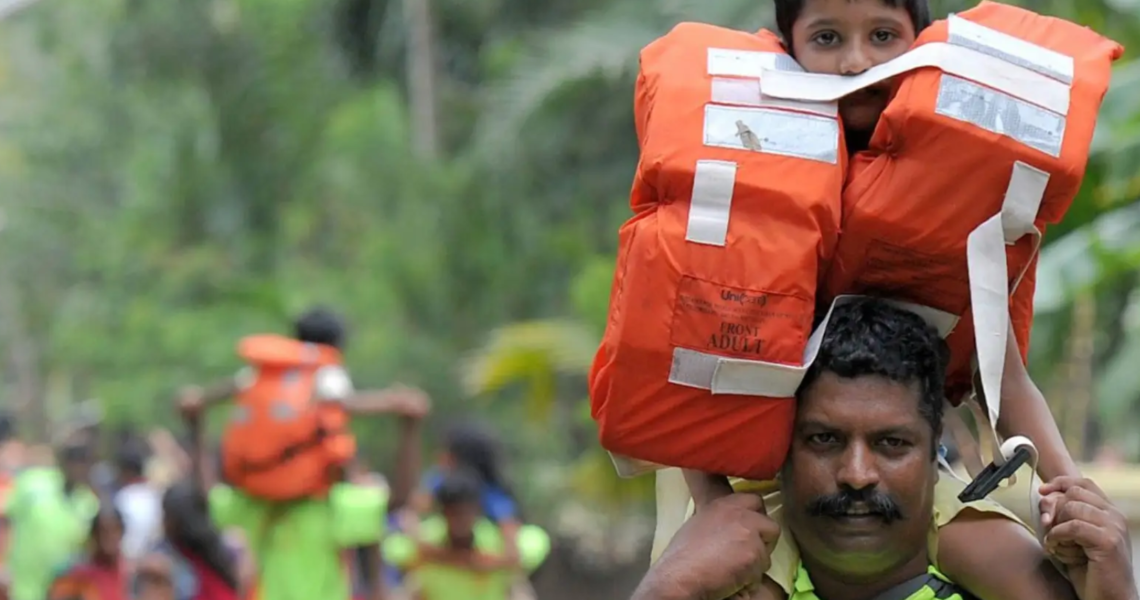 THE MONSOON FLOODS AND LANDSLIDES IN KERALA HAVE LEFT AT LEAST 370 PEOPLE DEAD.

We now know that over 1 million people – including more than 100,000 children – are staying in 3,274 relief camps across the region.

The state government has said many of those who died were crushed under debris caused by landslides. More rains are predicted, and a red alert is in place.

With nearly the entire state submerged in flood waters and people trapped in remote, hilly and isolated pockets, the real picture of impact is yet to emerge.

Kerala, popularly known as “God’s Own Country”, is one of the safest provinces in India. It’s known for its rustic beauty and has incredibly picturesque landscape. Its beautiful hills and quiet backwaters attract tourists from across the world and it often appears in the list of “must visit” destinations on National Geographic.

These are the worst floods to hit the state in nearly 100 years. And while each disaster is different, the lessons to be learned from communities, governments and voluntary agencies that have dealt with similar floods and disasters will be invaluable for Kerala.

MAKE A DONATION TO SAVE THE CHILDREN’S EMERGENCY FUND

In some cultures, disaster is seen as opportunity. Progressive social development, literacy, vibrant media and active community are Kerala’s key assets to tackle this disaster – and will help rebuild a more resilient, effective and efficient community. These lessons, arrived at by listening to people and working with government and voluntary agencies across the world, could set an example to the rest of the world.

Strong leadership is the catalyst to generate momentum and direction: two ingredients to define the speed, quality, appropriateness and coverage of relief work. It’s crucially important to make sure that processes and procedures do not paralyse a recovery effort. A key lesson being: consultation is key, but consensus is optional.

A real test of leadership in a disaster can lie in the time it takes for leaders to ask for help.

When disaster strikes, asking for help is not a signal of weakness, it is a key trait of able leadership. That alone will inspire others in the hierarchy to ask for help.

2. REACHING OUT TO THE VULNERABLE AND MARGINALISED

Some disaster victims and survivors are more vulnerable than the others. A government’s priority should be to ensure that relief efforts reach the most marginalised and vulnerable groups such as children, pregnant women, elderly people, poverty-stricken, transgender and LGBTI people, the disabled and those who are stuck in remote hill pockets.

Defining a response based on human-centered needs identified through a scientific, but often quick needs assessment, will help avoid the dumping of unwanted relief goods into flood-affected areas.

Conscious efforts should be put to integrate care and support for children and others who are terminally-ill and those who need palliative care. Palliative care and pain relief are critical yet overlooked components in many disaster settings.

Kerala has carried out pioneering work on palliative care in development settings. By integrating and demonstrating this through a network of grassroots palliative care workers, the state could set a “Kerala Model for palliative care and pain relief in humanitarian settings”.

Effective coordination is what stops a disaster from becoming a crisis.

The last thing you need in a crisis is a group of enthusiastic and committed volunteers and professionals, frustrated at not knowing how to support. When they don’t receive clear direction and don’t know what to do is when they start venting frustrations through the social media and media. Such situations often force the government to divert its precious resources (and often the best people) into perception management. Managing perception is the last thing you need when the need is to respond to the reality: human suffering.

Information sharing is the first step towards good coordination. Not just with the people but also flowing back from the people to decision makers.

Lastly, support from outside world should complement, and not replace, local efforts.

4. A MARATHON, NOT A SPRINT

Today, the focus should be search, rescue and relief. However, it is necessary to keep an eye on the big picture from the start. Integrating recovery and rehabilitation is a key ingredient in the not so well-known recipe for relief work. Relief and recovery need to happen simultaneously, not one after the other.

Lessons from elsewhere show context and needs of flood survivors change quickly, and sometimes it is necessary to smoothly shift the recovery effort’s focus from rescue and relief mode. Such a shift encourages those impacted by the flood to actively engage in relief and recovery efforts.

The engagement and participation in relief efforts is a fuel which drives recovery. When people are disengaged and when their concerns and aspirations are not  listened to, it leaves lasting footprints – often heard loud and clear in upcoming elections.

But flood-accumulated-water leading to water borne and vector borne diseases often take more toll than the actual floods. This doesn’t bode well for a Kerala known to tourists by “God’s Own Country”. A good volume of state’s revenue comes from tourism. News of epidemic outbreaks like diarrhoea, cholera and malaria and tourists don’t go well together and the impact of a preventable disease outbreak could be catastrophic on the economy in the long run.

Preventing disease outbreaks and focus on long-term health and hygiene should start on day one.

Kerala’s strong foundations of education, literacy and health – as demonstrated during the recent Nipah outbreak – are positive factors that can speed up its recovery.

There are a hundred things to be done in such a grand disaster setting. The list of things to do grows every day and coordinators can quickly become confused.

In such settings, children are a the place to start. Two questions to consider:

It’s crucial that children are kept central to the thinking, planning and implementation of emergency response. Two other key components are public health and boosting local economies through quick, swift injection of cash. Unconditional cash transfers have emerged as a key aspect of disaster response; this helps local people to kick start local markets and get back on their feet.

6. “BUILDING BACK” FOR THE BETTER

The big idea (as the UN says) should be to “build back better”. The risk of being on an earthquake fault zone should be a key consideration while formulating rebuilding plans.

The goal should be to make better, stronger and flood-proof houses, schools, hospitals and infrastructure.

While rebuilding infrastructure is important, it is necessary to recognise some of the invisible needs such as the mental health and psychosocial consequences of the disaster. Mental health impacts of disasters have catastrophic impacts on the psyche, health and economy. Embedding a component of psychological first aid and mental health into the relief and recovery rescue operation is key. Otherwise, people don’t engage, and recovery will never be complete.

In post disaster settings people are distressed and some (including factory workers) turn to alcohol and substance abuse. Absenteeism in factories and government companies impact productivity.

I have worked with children in Sendai near Fukushima in Japan since the 2011 tsunami. During my several visits and interactions, children expressed fear even after several years, some were too scared to flush toilets because the movement of the water in the toilet and the sound reminded them of tsunami.

Big disasters leave lasting scars on young minds. Psychosocial care and support should be a priority.

It is a simple truth that the earth is warming, and we are watching more frequent and often ferocious storms and floods. 2018 has also witnessed unprecedented heat waves in Europe. I was in Japan in early July when the worst floods in over three decades hit the country, claiming over 200 lives. Floods and storms are two disasters that make regular headlines and their frequency is increasing.

Humanitarian workers like me end up in more flood, cyclone and food crisis settings than ever before.

Some scientists warn that when it comes to the next big flu outbreak in Asia, it is not a question of “whether”, but “when”. All these factors remind us to make disaster preparedness and risk reduction integral to development planning and education system. Investing to prepare the community and people for one disaster will go a long way to prepare them to face other disasters.

Disasters and disease outbreaks need not be death sentences. A safe place for people during a disaster needn’t be somewhere else. Disaster risk reduction, disaster preparedness, and collaborative action and prioritising investments for children can make the difference between life or death – that is the way forward, the future.

An edited version of this blog/OPED/ eye-witness account also appeared on Save The Children Blog: https://www.savethechildren.org.uk/blogs/2018/what-we-can-learn-from-monster-floods