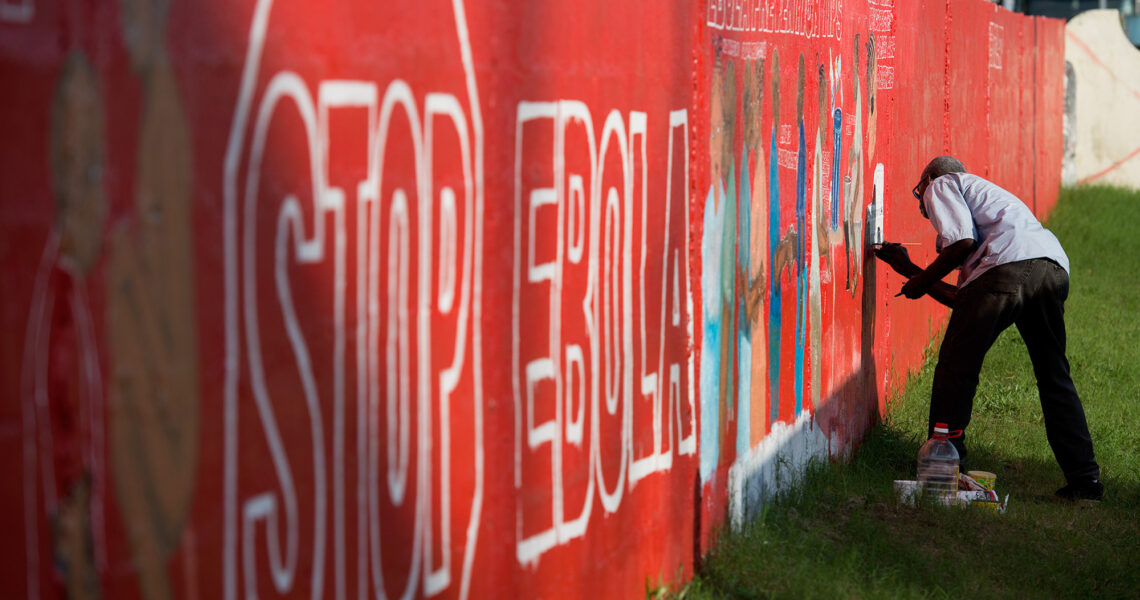 Speed is an important factor for any successful emergency response: Next time, to outsmart the virus, we need to act fast through quick deployment of equipment, specialists and field hospitals. Speed will play a critical role in writing a different story for the first hundred days – in Africa or elsewhere.

The best way to honour the lives that Ebola wiped out is by ensuring that it doesn’t repeat itself..

March 2015: After a marathon Ebola outbreak that has lasted a year and devastated thousands of families in Guinea, Liberia and Sierra Leone, projections are that all 3 countries are well on their way to ‘point zero’. However, the threat of a future outbreak is not over.

Thus the anniversary of the outbreak provides an opportunity to reflect on the lessons from the past as well as to prepare for the future, in Africa and beyond. To drive to the future, good drivers always use their rear view mirrors.

Every disaster provides learning opportunities. Mizuta Masahide, 17th century Japanese poet and samurai said: “Since my house was burned down, I now own a better view of the rising moon.”

The best way to honour the lives that Ebola wiped out is by ensuring that it doesn’t repeat itself. Rather than speculate, it is necessary to take a can-do approach. How can we make the response different next time?

A few urgent measures are vital in order to write a different story next time. Here is my take.

Speed is an important factor for any successful emergency response: Next time, to outsmart the virus, we need to act fast through quick deployment of equipment, specialists and field hospitals. Speed will play a critical role in writing a different story for the first hundred days – in Africa or elsewhere.

Build a strong public health system: Earthquake specialists have taught us a simple lesson: earthquakes don’t kill people or children attending classes in a school. But bad construction and unsafe school buildings do. A strong public health system can withstand the shock of an epidemic or pandemic threat next time, not just of an Ebola outbreak, but also other disease outbreaks such cholera, meningitis, severe acute respiratory syndrome (SARS), Middle East respiratory syndrome (MERS) and avian flu.

Monitor and be vigilant: There are concerns in West Africa about the coming rains. Health and transport systems are exceptionally weak in this part of the world, and we need to close that gap before the rainy season starts. Last year as Ebola spread through communities, unkind weather and the rainy season hampered the response and made roads so waterlogged that nothing could get through. In the absence of strong health machinery and social safety nets, rains and floods amplify the impact of an outbreak.

Prepare and don’t panic: Enhance readiness by preparing and training communities, especially health workers. It often takes weeks and months for external actual aid to arrive. During the initial days of the Ebola outbreak, except for very limited support from agencies such as Médecins Sans Frontières, Red Cross and Plan International, ordinary people were battling this deadly virus on their own. If a community is prepared adequately to respond to Ebola or any single disaster, they can very well beat most of the other disasters.

Start disaster preparedness, first aid and public health lessons straight from schooldays to build a culture of readiness and minimise deaths and devastation. I was at the world conference on disaster risk reduction in Sendai, Japan, in mid March (14-18 March). A deadly cocktail of multiple disasters – an undersea earthquake, a massive tsunami and a broken nuclear reactor – killed 15,891 people in Sendai and neighbouring areas in 2011. However, Japan has demonstrated that disaster risk reduction and preparedness save lives. It is far better and more cost effective to invest in preparedness than do firefighting after disasters strike.

Don’t ignore the invisible needs: While the priority action should be to stop the spread of the virus and safe burials, it is necessary to take care of the invisible impacts. For every public health crisis, there is an invisible humanitarian crisis, such as shut schools and high food prices. Further, it left many a scars on young minds.

A research report by Plan International concludes that Ebola has challenged the needs of children for loving relationships, for hope and for self-belief just as severely as it threatened their physical needs. Emotional wellbeing and psychosocial care and support should find a central place in relief and recovery efforts.

Orphans that Ebola has created are the true and living face of the outbreak. Many a local family has started taking them under their wings.

The world needs to supplement this true demonstration of African generosity with material support, so that such children don’t end up as an additional burden on families who are already struggling to find sufficient food and school fees for their own children.

Information key in a crisis

Information is a lifesaver in a public health crisis and media and social media can play a critical role. Rumours and ignorance have resulted in attacks on health and humanitarian workers, costing some of them their lives. In a crisis like Ebola, when lives and truth become first casualties, the media needs to go beyond the usual role of reporting. It has a lifesaving role to play to inform, educate and empower people.

After all, you can’t beat an invisible and deadly virus only with doctors.

A vigilant media can also help to make authorities accept the reality rapidly and thus start a quick response. As Albert Camus said, the best way to deal with plague is by being honest about it. Creative collaboration between technology, media, social media, health and humanitarian workers can help to write a different story during the next outbreak.

An edited version of this blog also appeared on Huffington Post: https://www.huffingtonpost.co.uk/unni-krishnan/ebola-outbreak-next-time-_b_6965384.html