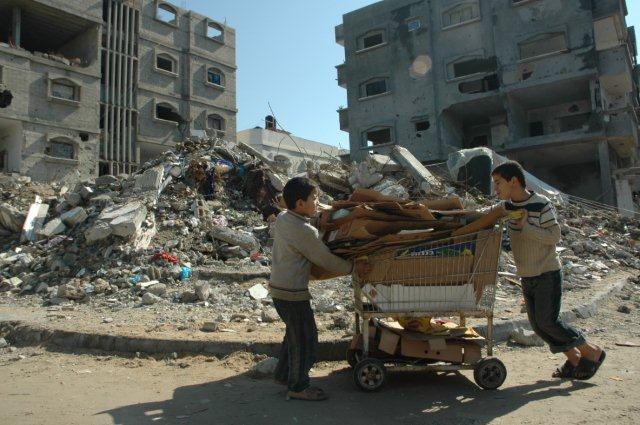 Gaza: The reality hits you fast. And it hits you hard. The moment you set foot in Gaza, you see destruction everywhere.

Junk concrete material – that is all what is remaining of  places where homes and schools stood till a few days ago. All are gone.

It is not that we, aid workers, have not seen death,devastation and destruction. But it is the realisation that these are avoidable that hits you hard.

After days of waiting and uncertainty, we entered Gaza today. There are several dozen aid workers still waiting to get into Gaza, we have been told.

True, there is always uncertainty at military boarders but it’s all the more complicated at the Israeli military boarder control at Erez — perhaps the only link between Gaza and the rest of the world.

Once you exit through the last revolving metal door at the border, you are in Gaza.

The contrast between the two places hits you hard. One fully developed and representing the first world and the other a different world, marked by death, devastation and military occupation.Well, the picture is incomplete till you meet the survivors who are keen to rebuild Gaza. No war zone can match their grit and resilience.

Lives lost in the war tell the story of this contrast further — over 1,440 Palestinians were killed and on the Israeli side 3 civilians and 11 soldiers died.

Yasser, my Palestinian colleague, warns me to be prepared, as he expects more attacks.

The sixty-minute drive from the boarder control to Gaza city is filled with suffering and sadness. The scenes remind you that the suffering is not temporary and it is the tale of generations.

On our way to Gaza city, we come across several people, many of them women and children, standing next to the rubble of what used to be their world.

It is late evening and the sun is about to set. Many people are lost in their thoughts — not sure where they will find a roof to sleep tonight.

I see a young boy tossing his football declaring that nothing can take his spirit away, come what may.

UN estimates that one third of the casualties in Gaza are children. 431 children died and 1,872 are wounded.

A wall hanging in the hotel where I am staying doesn’t mince words. On the hand-knit map of Palestine are etched the words — ”To those who have been martyred for the land of sad oranges and for those who are yet to be martyred.”

Is it the message from the past or a warning?

“Marhaba (welcome). Smell the jasmine and taste the olives. Jawaal welcomes you to Palestine.”

Original version of this post also appeared on  http://www.actionaid.org/main.aspx?pageId=