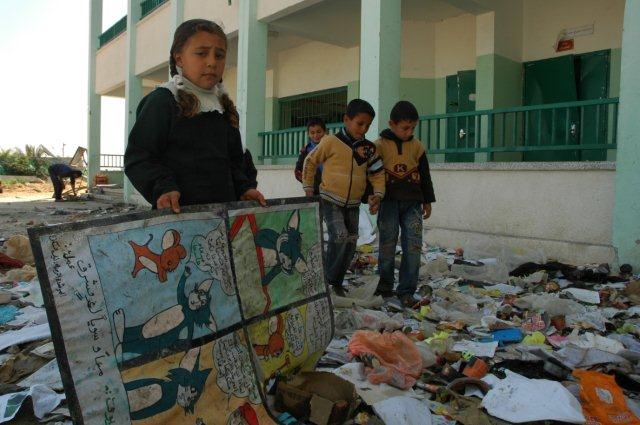 Gaza: At the Omar Khattab Primary School north of Gaza, you will see the devastation only in the bombed out structures, the twisted steel and rubble. There is something the Israeli F-16s screaming overhead can not stamp out. The smiles and the chatter, and the loud little voices reading together from the primary school texts.

This school, named after the legendary 6th century Islamic leader (known as an icon of justice), is their life and future for its over 500 little students. It was built partly with funds from the US government.

Once the heavy 48000 pounds bombers pulled away to the clouds after their bombing runs, what remained was the ruins of many classrooms. Among the dead during the recent bombing were Ibrahim (9 years) and Hamza (8 years), both students of this school. Apparently, it was several rounds of bullets that took little Ibrahim’s life, and Hamza lay dead with white phosphorous burns all over.

The UN says that 840,000 children are under extreme stress and trauma inducing conditions, and 56 % of the Gaza population are children.

Abu Warda recalls fond memories of Ibrahim. “He was an ‘A’ grade student. He always wanted to be a doctor”. She shows us a recent photograph of the dead boy taken while he was acting in a school play – in white apron, mimicking a doctor. There is a carton in front of him, with visible marks of Red Cross / Red Crescent – the lifeline in this place.

Abu Warda says the children are scared. They have nightmares, they day dream and are lost in thoughts. Teachers find it hard to keep them engaged.

“Now, many of them speak broken and incomplete sentences” says the head master. “Their achievement levels are going down”.

School lost their teaching materials. The school play ground is a testimony of the impact of this war—merry go round and other play stuffs all scattered around.

While the ActionAid and Austcare team was in this school, a bunch of school children walked with us to the school block at the far end. It now lies abandoned after the bombs ate away a part of it. Scattered all over are their playing equipment and books.

“The Israeli soldiers used this block as an army camp during the invasion” Abu Warda said.

Omsiyat (12 years), Ibrahim’s sister asks why children are made to suffer. Abu Warda told us children keep talking about their lost friend, Ibrahim. She says that some are keen to become doctors. Perhaps to fulfill Ibrahim’s dream.

Your browser may not support display of this image. I noticed a few children searching for something in the rubble. A smile broke on the face of 8 year young Wahida, self appointed leader of this group. In her hands was a colourful poster- one she had made with cheap crayons and paint for her school project. She says she is happy she got it back, sad the bombs burned a part of it.

More children pick up their projects and books from the rubble. More smiling faces.

“There is so much in this land worth living for”, wrote Mahmoud Darwish, regarded as the Palestinian national poet, years back. Perhaps these smiles underline that.

There are dreams to fulfill and lives to be saved, maybe these children one day would.