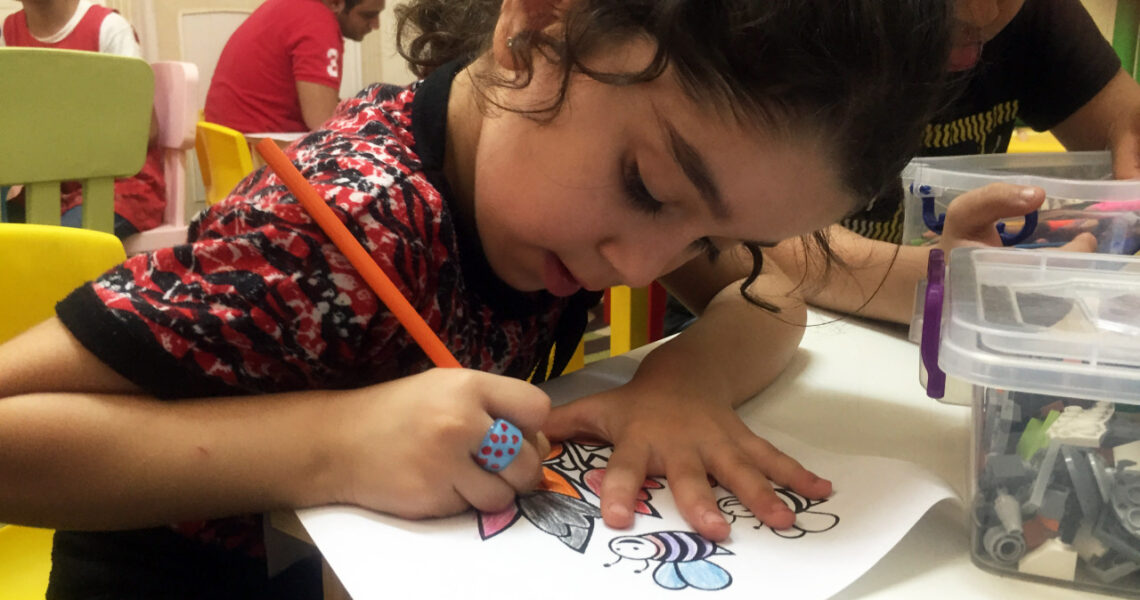 I ask a group of children what they want to be when they grow up. Half raise their hands to be teachers, the rest want to be doctors and engineers. These children are the future. Despite all the challenges, all my visits to the Middle East have been inspiring. As the Palestinian poet, Mahmoud Darwish said, “on this land, we have what makes life worth living.” The world failed Aylan. Can we help Amal make her life better?

In a crowded room in an urban refugee centre in Amman, Jordan, I met Amal* . She was busy painting a picture. Amal and her mother fled the ongoing war in Syria and are now refugees in Jordan. Amal does not know her age, or where she comes from. She just paints all day.

Amal reminds me of Aylan Kurdi, the Syrian toddler who drowned in the Mediterranean Sea on his way to find asylum in Europe. Aylan did not survive the boat journey to safety in Europe. Amal was fortunate to survive her flight to Jordan.

When you see the faces of young children in Amman’s refugee centre run by CARE International, a sense of the scale and impact of Syria’s humanitarian crisis begins to set in. The room is full of deeply personal stories of tragedies, persecution, displacement and dispossession, and buried under all that flickering hopes for a better future.

It strikes me when I meet refugees, that no one would make this journey if they had a choice. Imagine living in a neighbourhood that is often bombed, and you constantly run the risk of getting sniped at or threatened at gunpoint. Your children are starving. You have run out of options. What would you do? I am reminded of Somali-British writer and poet Warsan Shire who wrote: “No one puts their children in a boat unless the water is safer than the land.”

My journey from London to Amman was a pleasant five-hour flight. For refugees travelling from the Middle East to Europe and other neighbouring countries, the journey can often take weeks and months. And there’s no guarantee that they will make it, as they often do not have the necessary papers. The borders are often hostile and impenetrable. It is a long, arduous, uncertain journey.

We are in a situation that has not been seen since the second World War. Some 12 million people have now been affected by the conflict in Syria. Almost half of them are children. We are witnessing displacement of a whole generation. In the last few months, World Food Programme rations have been cut drastically in the Syrian refugee camps in neighbouring countries. This has led to a flashpoint, with thousands now braving the journey to Europe.

One refugee tells me that he would much prefer to live in his home country, and failing that, in a neighbouring country. However, he says, people in parts of the Middle East have braved bombings for over two decades now, including in Iran, Iraq and Occupied Palestinian territories. There is no safety, no food and no future – all of this is contributing to the mass exodus. Between 2010 and 2014, civil war cut the average life expectancy for Syrians from approximately 79 to 55 years – a sharp drop of over 20 years.

Some of the most vulnerable refugees are children under the age of five and those who have been separated from their families. Children of school-going age stand a chance of receiving some form of support, but those at the outer edges are easily forgotten. Even so, refugees of all ages face innumerable risks. Some families resort to putting their children into labour or forcing girls into early marriage as a coping mechanism.

We need to provide assistance at all levels. Thanks to the generous efforts of the Turkish, Jordanian, Lebanese and Egyptian governments, refugee children are allowed to attend schools along with local children. Germany and Sweden are also demonstrating a humane attitude towards refugees. In other parts of Europe, while ordinary people have been welcoming refugees, the behaviour of some of the governments indicates that compassion is in short supply. This must change.

Still there are big challenges, particularly for children. In Jordan, for example, schools often open in shifts, and some children walk up to six kilometres to reach them. Maybe schools need to go mobile – on wheels or online. Aylan Kurdi and Albert Einstein had something in common. There were both refugees. But the similarity stops there. Images of refugee children like Amal and Aiylan remind us that some people are less equal than others – they are often unwelcome at home and unwelcome abroad. It shouldn’t be like this.

I ask a group of children what they want to be when they grow up. Half raise their hands to be teachers, the rest want to be doctors and engineers. These children are the future. Despite all the challenges, all my visits to the Middle East have been inspiring. As the Palestinian poet, Mahmoud Darwish said, “on this land, we have what makes life worth living.”

The world failed Aylan. Can we help Amal make her life better?

*This name has been changed for child protection purposes

An edited version of this blog also appeared on Huffington Post: https://www.huffingtonpost.co.uk/unni-krishnan/syria-refugee-crisis_b_8244404.html