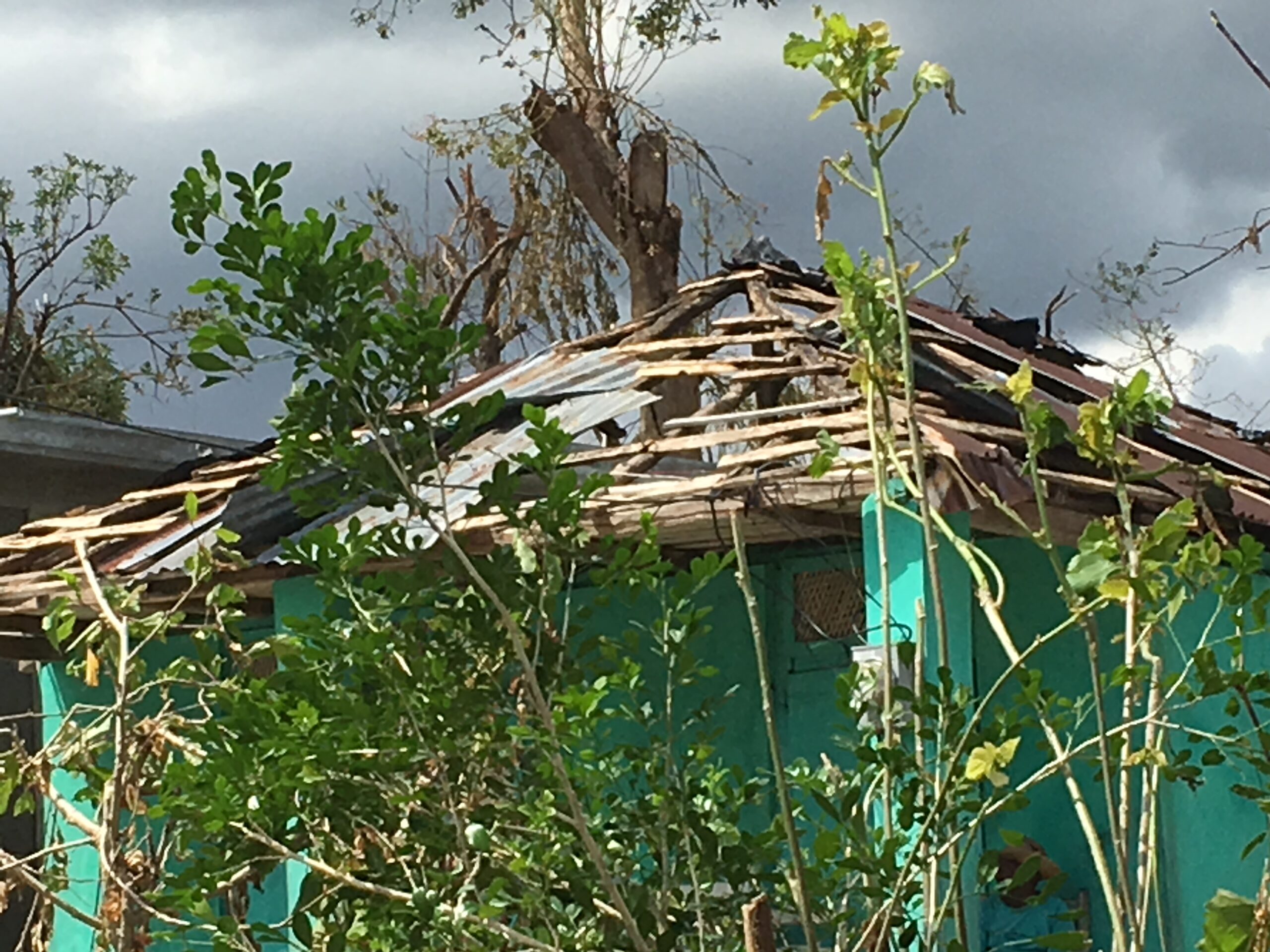 We walk along corridors past men, women and children sleeping on the floor. The storm has blown the roof away from the buildings in the school complex, there are cracks on the walls. One young man steps in to one partly damaged building as people wait anxiously outside.

In Haiti, seven-year-old Daphne is fighting two battles – the immediate aftermath of the storm, and the longer term impact of missing out on an education. This is her true story.

The storm brought widespread destruction, but it couldn’t wipe the smile from Daphne’s* face. I met Daphne during my visit to Mersan, a small village in southwest Haiti and a flashpoint for Hurricane Matthew, the worst storm to hit Haiti in half a century.

Mersan is devastated. The town is littered with uprooted trees and the twisted tin remnants of roofs blown from houses. The landscape has changed forever, and with it the lives of thousands of families. The UN says that 1.4 million people need urgent life-saving assistance, a large number of them children.

From the rubble, Daphne picks up two schoolbooks, calling them “a good catch.” I met this seven-year-old girl in Efakap de Mersan, the local secondary school. She has a shy smile and beautiful butterflies over her pink frock. The school is damaged, with the roof mostly gone, but some of the classrooms are intact. Now it is a temporary home for over 200 people who are using it as a makeshift shelter.

Arriving at the shelter, my medical team from our Emergency Health Unit quickly converts the headmaster’s offices into a temporary clinic. Our mobile medical team is the first medical healthcare unit to arrive on the scene since the disaster, and soon over 100 people appear to wait for consultations to start. Storm survivors are tired and some are coughing. Many children are crying, and their mothers blame “worms”. Some children are scared, and have nightmares. Relief helicopters fly over the shelter, making children scream even louder. Disasters inflict wounds on human minds: aid efforts must make the mental health of survivors, especially women and children, a priority. Survivors like Daphne are fighting two battles here – the immediate aftermath of the storm, and the longer term impact of missing out on an education.

The hurricane affected 430 schools across Haiti, with some completely destroyed. Emanuel*, a linguistics student from Universite D’etat d Haiti, takes me for a quick tour of the school at Mersan. We walk along corridors past men, women and children sleeping on the floor. The storm has blown the roof away from the buildings in the school complex, there are cracks on the walls. One young man steps in to one partly damaged building as people wait anxiously outside. Emerging with some schoolbooks, wet and with the print smudged, people applaud.

Children get busy picking through the pile, and Daphne gets two books. “I wish that school would start soon,” she tells me, holding the books close to her. But the adults who run the shelter tell me that for the local people who have lost everything this school has become a temporary home, and that Daphne and the other children, along with 116,000 other Haitian children affected by the disaster, may have to for wait some time for school to reopen.

The storm survivors will eventually need to find new homes, but that takes money, materials and personnel, and some damaged schools in the country are still unreachable. All of this could delay Daphne’s return to education and her ability to build a better future. “I want to be a doctor,” she tells me, looking at my first aid kit.

In disaster settings, in addition to medical care, water and food, children have unique needs such as education, protection and psychosocial care. Early this year, Save the Children and other humanitarian agencies called for a new fund, Education Cannot Wait, that aims to get children in crisis situations back into education at the earliest possible opportunity. In Haiti today, getting education up and running would also offer an additional platform to educate children about cholera and other preventable diseases.

As someone who has visited Haiti to support relief efforts on various occasions over the past ten years, some memories and inspiring moments linger on. I remember meeting a grandmother in Haiti’s Gonaives following another hurricane in 2004. While talking to me, she held a packet firmly in her arms, as if she feared someone would snatch it from her. She later told me that it contained schoolbooks. Each storm takes the books away and she can’t afford to keep buying books for her grandchildren. She rents them, two days a week. For her, for Daphne, and for all the families affected by Haiti’s natural disasters, schools and books are precious.

World Disasters Report 2016 released this week calls for investments to bolster the ‘resilience’ of communities. Simply explained ‘resilience’ is about empowering people to help themselves. Haiti, a country where disasters are frequent, long term investments that strikes at the roots of poverty, disaster risk reduction and preparedness and building resilient health and education systems is a great start.

Experts have defined ‘resilience’. Daphne and the grandmother of Gonaives tell us what it is.

*All names changed to protect identities*. Views are personal.

Dr Unni Krishnan is Director of the Emergency Health Unit, Save the Children. He is on the Editorial Board of World Disasters Report 2016.

An edited version of this blog also appeared on Huffington Post: https://www.huffingtonpost.co.uk/unni-krishnan/haiti-storm-resilience-a-true-story_b_12603968.html