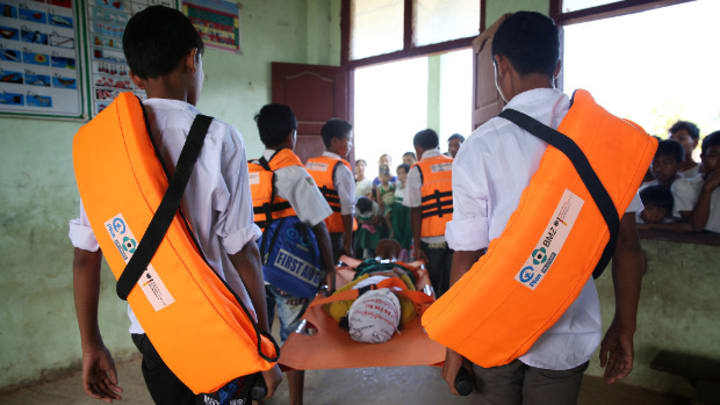 The storm, one of the worst ever to hit the Pacific, provides a stark reminder of the real world we live in and how quickly disasters can tear lives apart and reconfigure landscapes, leaving thousands homeless. The storm also affected Solomon Islands, Tuvalu and Kiribati.

Yet there are ways disaster preparedness measures can be put in place to minimize the impact. Here are some of them.

Stop a disaster — prevent a crisis

We may not be able to stop an earthquake, but we can reduce the deaths, suffering and destruction they cause. Earthquakes don’t kill people or children — bad buildings and unsafe schools do. That’s why safe schools, built to withstand a disaster, and early warning systems save lives.

Every disaster is a wake-up call and proves there is a need for more risk reduction and disaster preparedness work.

Break the cycle of vulnerability

Every storm, flood and drought highlights the need to reduce global warming and address climate change, as these natural occurrences are high octane drivers for such disasters. The frequency and intensity of storms are increasing with each passing year, and it is imperative we are prepared to deal with them, both physically and mentally.

In 2013, Typhoon Haiyan devastated the Philippines. It was just one of the 20 plus typhoons that hit the country in 2013. Such countries live between disasters, as they are either recovering or getting ready to face the next storm. While providing lifesaving humanitarian assistance afterward is key, if we want to break the cycle of vulnerability, we must strike at the cause.

Disasters demonstrate a bias against girls and women, while disaster settings and relief camps often exacerbate inequalities and violence toward them. Creating a “zero tolerance” approach on violence against girls and women needs to be done urgently. To make this happen strong political will and ambassadors are key. Hollywood star Angelina Jolie’s work to stop gender-based violence in conflict is a good replicable model.

Girls are also good advocates and need to make their voices heard. During a panel discussion at the conference in Sendai, two young girls made a lasting impression. They told the crowd young people’s voices must be amplified and suggested unconventional solutions, using creative approaches.

Tomomi, a Fukushima disaster survivor, stressed the potential of information and democratic space as lifesavers. Limited information on radiation has amplified anxieties of nuclear evacuees and this inspiring girl now runs a weekly community radio program, which is gaining popularity, to educate others about the risks.

Appropriate information at the appropriate time can be a lifesaver — we see this recurring theme in various disasters in recent times, including during the Ebola outbreak in West Africa. Traditional and social media can play a critical role to inform, educate and empower people.

Plan’s youth delegate, Sophoeun, told the audience how school-based disaster preparedness and risk reduction work helps her and school friends battle floods in Cambodia. She refuses to be a victim and wants to empower girls. Investments are needed to replicate such young role models.

Immediately after a disaster, lifesaving aid floods into a country. Yet, while humanitarian workers are adept at dealing with the physical needs, they can miss the invisible needs of disaster survivors — such as mental health and psychosocial support, especially for children. Emotional care and matters of the mind must find a central place in disaster response.

The prime minister of Japan announced at the conference that Japan will contribute more than $4 billion for disaster risk reduction and preparedness in developing countries over the next few years. This is a welcome move. However, material and mind matters are inseparable in disaster preparedness.

Ten years ago, 19,000 children died in an earthquake in Pakistan. Disasters impact children disproportionately. Their specific needs such as protection, education and emotional care often receive the least attention. However, there are examples of school and children-based disaster preparedness and risk reduction work from several developing countries such as Bangladesh, Cambodia, India, Indonesia and Peru.

Such work not only prepares young people to run and evacuate when a storm is set to strike, but it makes them strong and gives them the knowledge to lead evacuations. Often planners, politicians and donors cite complexities and layers of work needed to make the world a safer place. Children and young people are a good place to start and you won’t go wrong when children are at the heart of planning and development.

Saving lives and reducing suffering is easy and possible when people and children are better prepared. To save lives and make the world a safer place, there is no point in acting only after they strike. We need to act before, during and after disasters.

Asako Osaki After receiving a masters of international affairs, Asako joined U.N. Development Program and served as the program manager at the Bureau for Development Policy, specializing in the promotion of gender equity and women’s empowerment. Upon her return to Tokyo, she has been active in mainstreaming gender in Japan’s development assistance policies and programs, working with government, NGOs and research institutions. She is also a visiting professor at Kwansei Gakuin University and a board member of Plan International Japan.

Dr. Unni Krishnan is Plan International’s head of disaster response and preparedness and a leading expert in the humanitarian sector. Over the past 20 years, he has worked on the front lines of various humanitarian situations, where people are faced with disasters, terror, epidemics and extreme weather events.

Edited version of this blog also appeared on DEVEX : https://www.devex.com/news/tame-disasters-you-need-to-work-before-during-and-after-85745