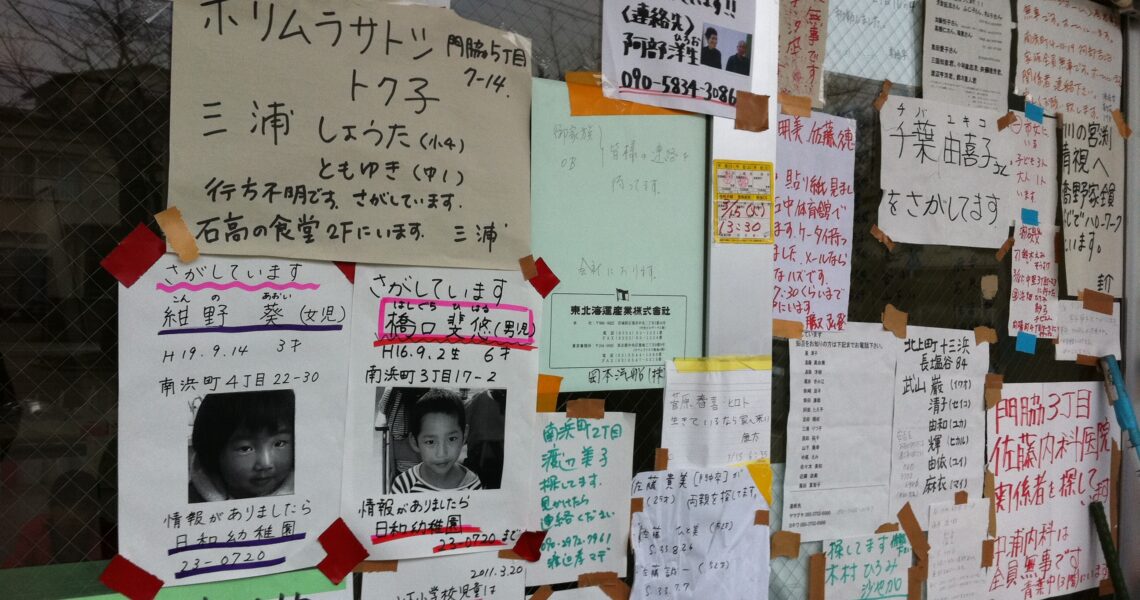 SENDAI AND TOKYO – The name of the kindergarten is Sakuragi Hanazamo, or, translated into English, Cherry Blossom Tree. It’s in Tagajo, 20 km from Sendai. On any other day, it should have been bubbling with the chatter of 120 small children. Silence greets me when I enter the compound. The playground is covered with mud. Toys and cartoon books are scattered around. They too are covered with a layer of mud. Some of the shoe racks still have tiny shoes. In the next compound, I spot a pile of cars. They lie stacked up, one above the other.

On 11 March, before the earthquake and tsunami struck, 100 parents came here to participate in a school meeting and the mandatory recreational exercise. Some children left with their parents just after lunch, and a few went to visit their grandparents. When the first tremors started, those who were in the school did not panic. The children were trained to respond to earthquakes. Madame Kamada, the principal, recalls, “They all ducked quickly and took cover below the furniture, covering their heads.”

Even this kind of basic disaster preparedness reflex would surely have saved thousands of lives. Otherwise you could multiply the deaths in Japan several times. Haiti didn’t have this culture when the 2010 earthquake struck. As a result, more than 240,000 died and it turned the development clock back a generation. At Sakuragi Hanazamo kindergarten, the earth stopped shaking after a few minutes, and, as per the drill, the children came downstairs and assembled in the playground. “It was snowing and the weather was freezing. So we piled them into school buses,” says Kamada. She was on the phone with a friend and heard that a tsunami warning had been issued. The kindergarten was 4 km from the seashore, but by the time her call ended, water had begun to enter the compound. “The school building was intact, so I ordered everyone to move to the first floor. Water came rushing in, taking everything with it,” she says.

They saw a school employee who was outside being swept into the compound. He was struggling against the fury of the waters by holding on to a pillar. “We lowered a ladder from the first floor and he slowly climbed up,” Kamada says. Their relief at saving the man was short-lived. The water was already 2 metres high by then, and moving with deadly force. Three young children were swept into the compound. They hit the wall and were tossed around. All three died.

Aid agencies estimate that the tsunami has left 100,000 children displaced, separated or missing. I have been on the ground in seven major earthquake situations and in four countries ravaged by the 2004 tsunami. I have also been in war-torn places like Afghanistan and Gaza. But nothing could have prepared anyone for this. It breaks your heart. Nearly 16 million people living in the coastal belt have been directly hit. Extreme weather and snow have been hampering relief efforts. Thousands of children are without any warm clothes. The World Bank says the rebuilding will cost $232 billion, and it will take Japan at least five years to reconstruct its affected regions. This is the best case scenario. Everything I see here corroborates this dire forecast: recovery will be a marathon.

I was in Woking near London where Plan International’s headquarters are located, when a text message from my niece in Australia woke me up: ‘Japan hit by tsunami and earthquake.’ Usually, we don’t work in developed countries since they have resources and organisational capacities in place. However, this was an unprecedented disaster and it needed an unprecedented response. I decided to go. At Tokyo’s Narita Airport, the arrival terminus was deserted. On the other hand, airport officials said departure was overcrowded. No one was coming in, many were leaving. The earthquake, tsunami and a fuming nuclear plant had created a deadly cocktail. Japan was one of the richest countries in the world, but it didn’t matter. We met hundreds of people, several of them children, living in crowded evacuation centres. The military, police and local fire-fighting units had mobilised 120,000 people for the relief and clean-up operation. However, the damaged nuclear reactors were priority and had stretched their limits. Relief operations had taken a backseat.

Disaster response in many countries has shown that children do not get adequate attention in relief and recovery plans. Sure, life-saving contingencies like medical assistance, food and water are critical in post-disaster situations, but it is equally important to deal with invisible needs like emotional first aid. Children are the worst hit emotionally in disasters. Managers and volunteers in Japanese relief camps say the kids kept asking whether a bigger tsunami or earthquake was going to happen, and what would happen with the nuclear reactor. The NGO Save the Children went to areas north of Sendai like Ishinomaki, Nobiru and Onagawa and noted that conditions were ‘desperate’ for children. Ian Woolverton, who led the mission, called the scenes ‘terrible’. ‘In some places like Onagawa, there was nothing left. In other places like Ishinomaki, we found children in evacuation centres huddled around kerosene lamps,’ he wrote in a report put up on their website. They found that children were aware of the danger facing them if the Fukushima reactor was not contained. A 10-year-old Yasu Hiro was quoted as saying, “We know about the bombs at Hiroshima and Nagasaki, and we are very scared. It makes us really worry. If it explodes, it is going to be a tremendous ordeal.”

After reaching Sendai, I went to meet local education officials. They were in the middle of a meeting. I spotted a group of schoolteachers and went to talk to them. They told me some schools were going to reopen and teachers were anxious about how to face students. I shared with them how disaster response agencies tackle the emotional fallout in these situations and the basics of emotional first aid. In Haiti, for example, we collaborated with Clowns Without Borders and deployed clowns. It brought a few smiles to the faces of children even in the midst of that monumental tragedy. The Japanese don’t need any crash course in innovation. Quickly, they came up with their own suggestions on how to use these messages for larger audiences by using radio spots and cartoon stories.

I also attended a coordination meeting with other agencies and the local government. Coordination between relief agencies is also critical in disaster situations. Uncoordinated and inappropriate aid in humanitarian situations is not just useless, it is harmful. During this meeting, some local Japanese organisations raised their concerns: aid was not getting through to remote places and time was running out for survivors.

Anxiety can take many forms in Japan today. In post-earthquake situations, it is advisable to stay in open spaces or tents as aftershocks can bring more buildings down. And aftershocks are very regular. However, the threat of radiation demands we stay inside concrete buildings. Two opposing choices, but which is the bigger risk? We settle on indoors. I was in Plan’s Tokyo office when we felt several aftershocks. Japanese colleagues are used to it. What they were not used to was an alert about a major power cut in Tokyo. We were asked to evacuate the office in a few minutes. I told them about power cuts in Kerala during my childhood. I said we used to get power between cuts, and that brought a few smiles.

Panic was everywhere in Tokyo. Shops were running out of essential supplies. Reports said Air France had sent two aircraft to evacuate French citizens. I received Twitter messages confirming US warnings of ‘extremely high’ radiation levels. The EU had said ‘apocalypse’ is a well-chosen word for the unfolding nuclear crisis. A couple of European embassies were shifting to Osaka, I was told.

In Fukushima, the threat of a serious nuclear fallout is only too real. The Japanese government has banned consumption of fresh milk and spinach from provinces close to Fukushima. Perhaps they are taking lessons from Chernobyl 1986, where consumption of these two items increased health complications.

On Thursday, 17 March, we got a distressing alert that the winds were changing and that the radiation level in Tokyo would shoot up the next night. An Italian journalist called me from Hiroshima, as did a veteran crisis reporter who was doing a story on what survivors of the 1945 atom bomb felt about the unfolding nuclear crisis. He gives me this advice: “Amigo, get out of Tokyo. Radiation is no child’s play.” There are 35 million people in the metropolis of Tokyo. Where will they go?  Also, Tokyo is 200 km from Fukushima, the fuming nuclear plant, and I hint to him that Tokyo’s chances of survival are very good and that that might be a better story to report.

A special mention is needed here of the admirable resilience of the Japanese. Everyone you meet can offer a crash course in coping with disaster. I was with my team at a temporary childcare centre set up in a concert hall on Saturday. There were a group of teenage students running a makeshift information centre. I note a few Post-its and papers. They tell me that people, especially children, are posting questions on the bulletin board. Volunteers run around to find the answers. And they are quick. Accurate information at the appropriate time can be a lifesaver. Survivors need information—on support systems as well as their rights.

On Sunday, we are at Ishinomaki, a fishing port 40 km from Sendai. The local school has been converted into a temporary evacuation and relief camp. People are staying in three different halls. In one hall, there are over 100 families. Camp officials say the children are scared. We encourage them to have storytelling sessions and group activities for them. Crayons and paper go a long way in helping children cope, because it helps them express emotions and verbalise feelings, both necessary forms of release to beat the stress generated by a life-and-death crisis. Earlier, an 80-year-old woman and her 16-year-young grandchild were pulled out of the rubble here, eight days after the disaster struck. There was celebration all around. There is always hope even in the midst of tragedy.

Edited version of this blog also appeared on Open -The Magazine https://openthemagazine.com/features/world/tsunamis-children/