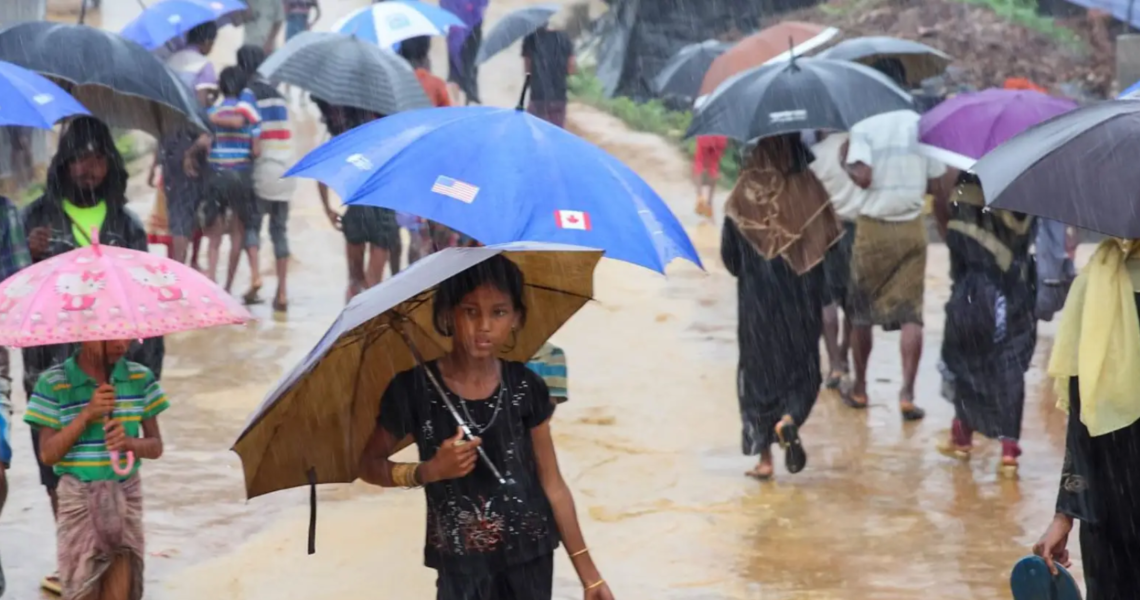 Monsoon rains are imminent in this part of Bangladesh, one of the most flood prone parts of the country.

This year’s rainy season is going to be even more dangerous than the last, with almost 800,000 Rohingya refugees now living in overcrowded camps. UN and aid agencies have warned of the potential for a “disaster within a disaster”.

Floods can inundate camps, and cause landslides on denuded hill slopes. They can cut water supply, sanitation and health care systems, and cause epidemics.

Rohingya children are particularly vulnerable, suffering high levels of malnutrition and low rates of immunisation back in Myanmar, and now living in harsh conditions where they rely on food rations to survive.

AID AGENCIES ARE RACING AGAINST TIME

The Bangladesh government and the UN have appealed for nearly £750,000,000, however so far just a small fraction of this amount has been committed.

Since August 2017, Bangladesh has opened its borders to Rohingya fleeing brutal violence and killing in Myanmar. They arrived in the thousands every day – dehydrated, sick, malnourished and distressed.

In September, I came across children who were too tired and overwhelmed to move or even smile. They had walked barefoot for weeks, some of them escaping bullets and witnessing or experiencing unspeakable human rights violations back home.

In what was the fastest growing refugee crisis in the world, Rohingya refugees settled in a relatively small amount of land, in a densely populated country quickly creating the world’s biggest refugee camp. Jungles frequented by elephants were even cleared so Rohingya families could set up tents. In October four Rohingya people, including three children, were trampled to death by an elephant in Balukhali makeshift camp.

This week, while visiting a primary health centre run by Save the Children’s Emergency Health Unit in the Karantoli camp, I saw Rohingya children playing football and flying kites. They had food and access to basic health and nutrition services.

WHEN AID GETS THROUGH, IT’S LIFE SAVING

More needs to be done, however. Bangladesh’s Ministry of Health, together with local organisations, UN and aid agencies, is mounting a massive cholera vaccination programme. A million Rohingya and host community members are expected to be covered in one of the largest such efforts of this kind.

However, there are other diseases and illness lurking here. A diphtheria outbreak has already claimed 40 deaths. About 25 percent of the toilets and half of the wells in the camps are expected to be severely damaged by floods. Such flooded conditions, cramped spaces, contaminated water and crowded camps are an ideal setting for disease outbreaks.

Storms and floods amplify anxiety amongst refugee children who are already distressed from the inexplicable violence they faced back home in Myanmar. Children are very resilient but there is a limit to what young minds can withstand.

We need a strong, thoughtful response from the international community. Rohingya children deserve a second chance and it is possible to change their sad tales.

An edited version of this blog/OPED/ eye-witness account also appeared on Save the Children Blog: https://www.savethechildren.org.uk/blogs/2018/floods-threaten-rohingya-lives