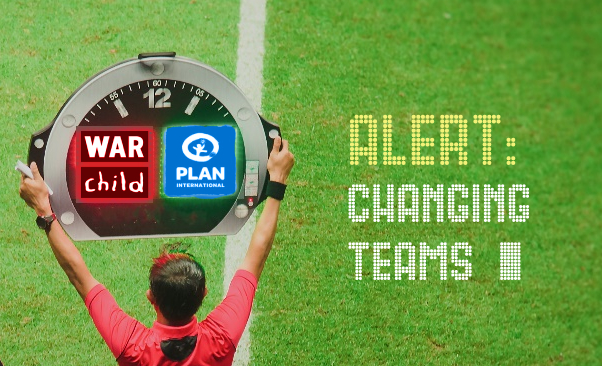 For the past 21 months, I have worked as a ‘glorified servant’ of our frontline teams in our country offices in War Child– during unusual times when the idea of ‘normal’ was being redefined. I am starting a new job at Plan International, a humanitarian and development organisation that advances children’s rights and equality for girls.

As I wait to change jerseys, here is a flashback of what I have learnt during the pandemic, my time in the Netherlands and from wonderful colleagues @ War Child. I hope there is something for everyone in this.

Stars are on ground – they are the true defenders of humanity.

Everybody knows a simple truth: children need our support the most during crisis times and the first line of defence is always our frontline workers. COVID-19 pandemic taught us another lesson – our frontline workers are sometimes the only line of defence. I have written about some of them here and there. There is a positive and infectious ‘one-and-a-half glass’ attitude in each one of them! I have watched with true admiration how their unflinching dedication (24 X 7) makes a meaningful difference in the lives of children like Amal and in difficult places. It has been a true honour to work with you all. My learning? An organisation is only as strong as its frontline staff.

Does a focus on frontline staff make ‘business sense’ and compromise the budget balance sheet? Allow me to share a fascinating learning during my time in the Netherlands. I had the opportunity to listen and learn from ‘Buurtzorg’ (“Neighbourhood Care”) and its visionary leader, Jos de Blok. Buurtzorg had its humble beginning in 2006 with a team of 4 nurses. By 2018, this ‘care company’ grew and employed 10,000 nurses, with teams in the Netherlands, Sweden, Japan and the United States. During the same period, Buurtzorg also grew in other areas of care such as mental health, children and families. Their ‘Client satisfaction rates’ are the highest for any healthcare organization. Buurtzorg has been named the best employer in the Netherlands four times and won an award for best marketing in the care sector. They achieved most of these without certain dedicated departments. Ernst & Young says the Dutch health care system could save 40 per cent, if all care was provided the Buurtzorg way.

What helped Buurtzorg grow, scale up and be client-friendly? By placing clients and frontline workers first. Most of their success is attributed to a new management approach: ‘integrating simplification’. “Humanity over bureaucracy”, as they call it. The founder and CEO of Buurtzorg, Jos de Blok explains: “It is easy to make things hard, but hard to make things easy.”

Is the Buurtzorg model applicable for humanitarian aid agencies? I hope to learn more and possibly apply their good practices in future jobs.

How to make sense of the future and stay relevant and useful?

The humanitarian sector is going through a ‘transformative reset’. The next 5 years may define the next 25–50 years of the humanitarian sector. Stronger scrutiny, higher accountability, tougher questions about true added value and a stronger push for diversity, locally informed action, and decolonisation of aid and collectivism. COVID-19 and its impacts are likely to cast a long shadow over communities we are expected to serve and work with and for. “The threat is not over anywhere until it’s over everywhere. Anyone who thinks the pandemic is over is living in a fool’s paradise”, said Dr Tedros, WHO Director General in the third week of July. The humanitarian sector will be defined by the fallout of the pandemic for a long time.

So, how do you make sense of such a fast-evolving scenario? What really matters? What skills are useful?

Today, over 82 million people have been forced to flee conflicts, wars and persecution. For those who can’t read the writing on the wall, consider a couple of facts – extreme hunger amongst children have reached a tipping point, economic deprivation and grinding poverty are driving people to take their own lives in COVID-19 settings; worldwide increase in child labour has been registered for the first time in two decades (impacting education, child protection and mental health and psychosocial outcomes), and the need to safeguard children and child rights and equality for girls is more pressing than ever before. Add to this, the climate breakdown.

So, how do you make sense of a dynamic world and evolving scenario? What really matters? What skills are useful? For beginners (and for those who are open to being challenged about their own learning and biases), the seven transferable skills (e.g., critical thinking and communication) is a good starting point. For a curious mind, communities with which we work are perhaps the world’s best sources of learning and wisdom.

What lessons can one learn from a rugby team about organizational culture?

All Blacks (New Zealand’s legendary Rugby team) has an unbeaten 75 per cent winning record in test matches over a 100-year period. I had the honour of watching the All Blacks while I was living in Australia (before I moved to Amsterdam and War Child). The first lesson is that you often need to pass the ball backwards and to others to move forward. The second lesson is about a ‘winning’ and ‘learning’ organizational culture that promotes a total commitment to integrity and honesty. Those who want to know more, try James Kerr’s book ‘Legacy’. Building an organizational culture is all about keeping a way of life that choses ‘character’ over ‘talent’. And integrity is the starting point of leadership. And of course, “if your nose is not bloody, you haven’t tried and played hard enough and haven’t taken risks.”

How does one survive and thrive in a combative environment?

To be impactful, firstly, we need to be functional and sustainable. And to be sustainable, survival is a first step. Agility and ability to adapt is a passport for survival – if in doubt, ask our frontline teams how they and our local partners adapted quickly to respond to a raging pandemic. As Charles Darwin said: “It is not the strongest species that survives, nor the most intelligent, but the ones most responsive to change”.

Crisis – a litmus test for leadership:

Most of my time in War Child was spent responding to the pandemic. Every crisis is a litmus test and reveals the true colour of humanity. It also defines leadership.

Before I moved to War Child and the Netherlands in October 2019, I used to be based in Australia working with the awesome Emergency Health Unit in Save The Children. During my time there, I had the unique opportunity to listen to Captain Richard de Crespigny.

On November 2010, Richard was Captain on board Qantas flight (QF-32), an A380 Airbus flying from Singapore to Sydney. A380 is the biggest and most complex aircraft in the sky. Four minutes after take-off, mid-air, its engine number two exploded. About 650 wires were broken; 21 out of 22 systems were affected. On board, there were 469 people.

Captain Richard explained how he brought the plane down safe, hours later. Not even a single person died in what was considered as the most complex mid-air explosion. Richard summarized what helped him to steer the exploded aircraft to safety – it is all about leadership. For more about this story and about leadership in crisis settings, read ‘Fly-Life lessons from the cockpit of QF 32’. Or listen to this podcast by Dr Norman Swan (Australia’s ace journalist) on the ABC. It is a master class on crisis management, leadership, and teamwork.

Every humanitarian emergency has some parallels to this mid-air crisis. Here is a quote from the podcast: “Stay alert. The more you know someone, the less you are about to criticize them. You would be reticent to say, look, I think you’re doing the wrong thing….”. An organizational culture that promotes scientific curiosity, critical thinking and tough questioning is necessary to make sure that we don’t operate in echo chambers.

A visit to Leiden … learnings from a genius:

Leiden is a city in the province of South Holland in the Netherlands. Rembrandt, one of the world’s most famous painters, was born and educated in Leiden. For over 4 centuries, Leiden has been a prominent scientific centre in Europe. If you ever visit Boerhaave Museum in Leiden, don’t miss the fountain pen on display – the one that Albert Einstein used to write down his research on general relativity. Einstein was a guest faculty at Leiden University. As the great scientist said: “…concern for man (read people) and his fate must always form the chief interest of all technical endeavours. Never forget this during your diagrams and equations.” In simple words, people come first.