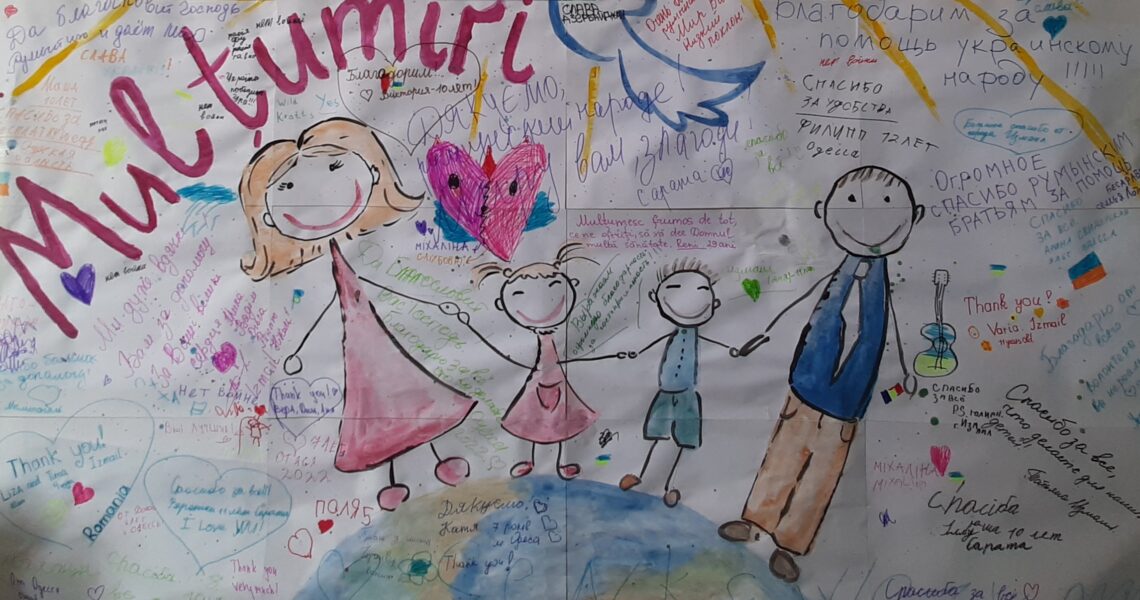 “A WAR IS OFTEN A FUNERAL IN SLOW MOTION…”

Images from Ukraine of bombed homes, rubble and fire balls from missile strikes dominate our screens. Reports indicate that at least 136 people have died so far, including 13 children. One of these was a 7-year-old girl called Alisa who died during an attack on her kindergarten.
Some people are calling the war in Ukraine the beginning of a third World War, others the second Cold War. Let’s be clear, a war by any name is wrong.

Children bear the brunt of conflict

UN agencies are warning that this war may result in 5 million refugees. Humanitarian workers receiving refugees on the Ukrainian-Romanian border told me today that the number of refugees crossing the border has doubled in 24 hours. No doubt this is the beginning of a long saga of suffering.

Wars impact children more than anyone. I met 10-year-old Lamia in a paediatric hospital in Baghdad during a humanitarian mission nearly 20 years ago. She told me she had nightmares about the missile strikes. I’ve since been told this by many children I’ve met in war and conflict zones.

We must prioritise the needs of children

Children should always be the priority in humanitarian crisis settings. Girls, children with disabilities and children who have sustained trauma should be at the top of the list.

Lifesaving needs such as emergency medical assistance, food and water are critical, however, there are other issues that must not be overlooked – protection from physical and sexual violence and exploitation, and the cost to children, especially girls, of disrupted education.

This conflict has put children and young people at significant risk of violence. It is essential that urgent support is delivered to prevent and respond to all forms of sexual and gender-based violence and violence against children.

Children affected by the war on Ukraine must be protected both in their country of origin, while they are on the move and in host countries.

Children fleeing homes often walk for hundreds of kilometres, dodging bullets, gunfire, missile strikes and violence. Some are separated from their families, friends and pets. I’ve seen such children arriving in refugee camps sick, dehydrated, malnourished and suffering from trauma. Some girls feel they need to be on guard all the time since they have witnessed things a child never should. Imagine such suffering multiplied many times, because of the impact of a pandemic, or raging hunger as in other conflict zones in the Horn of Africa and Sahel.

Mothers I met in the conflict zones of the Democratic Republic of the Congo told me that when their children do manage to fall asleep, they wake up screaming. Suffering goes on in the minds of children long after war ends. Providing psychological first aid and psychosocial support is critical from day one.

Children who have lost mobility are often more prone to psychosocial challenges. The mother of Manzoor, a 14-year-old I met in Mazar-I-Sharif in Afghanistan, told me that land mines wiped out Manzoor’s both legs, stopping him from playing football, his favourite sport. He cries all the time, she said. It was not easy for him to engage in play and other activities that make a child a child. Manzoor’s mother told me that a war is often a funeral in slow motion.

Ongoing, ensuring uninterrupted access to safe, inclusive, quality education to children affected by crises will be their passport to a better life.

During conflict where civilians are at risk, three actions are needed. To stop the war and stop deaths, to address human suffering and humanitarian needs, and ensure unhindered access for humanitarian workers and aid. Meanwhile we need diplomatic solutions to provide justice and establish lasting peace.

I work for Plan International, a humanitarian and development agency founded in 1937 by journalist John Langdon-Davies and aid worker Eric Muggeridge, with an idea to provide compassion, food, accommodation and education to children whose lives had been disrupted by the Spanish Civil War. Now, more than eight decades later, under the shadow of the pandemic, ongoing conflict across the globe and a looming climate emergency, our work with and for children is more relevant than ever before.

The scenes of human suffering unfolding in Ukraine should remind us that there is never a bad time to talk about peace and how to give peace – and our children – a chance.

An edited version of this blog also appeared on: